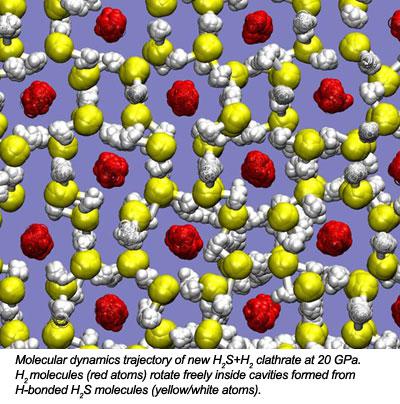 In a combined experimental / theoretical effort, our new new paper on H2S+H2 was just accepted for publication in Physical Review Letters. In this work we demonstrate the formation of a "guest-host" type molecular compound. Hydrogen bonding strength is tuned with pressure until the formation of new clathrate structure occurs.

Many of water’s familiar properties are due to hydrogen bonding: the attractive interactions that exist between molecules due to their polarity. For its molecular weight, water (H2O) shows extremely high melting and boiling points, as well as a wide temperature range separating the two properties. In the presence of small molecules, water crystalizes into compounds called clathrates. These compounds, similar to traditional ice, trap small “guest” molecules inside polyhedral hydrogen-bonded “host” water cages. Clathrate compounds trap small hydrocarbons naturally on the ocean floor, and can even be used to store and transport gases like hydrogen for future energy applications.

While chemically similar to water, hydrogen sulfide (H2S) shows little to no hydrogen bonding under normal conditions (as evidenced by its low melting and boiling temperatures); however, for the pure component, pressure can be used to tune intermolecular interactions and increase the structural significance of hydrogen bonding.

In a combined experimental and theoretical effort, researchers from the Geophysical Laboratory    (Timothy A. Strobel, Maddury Somayazulu and Russell J. Hemley) and Oak Ridge National Laboratory (Panchapakesan Ganesh and Paul R. C. Kent) have discovered a new compound formed from mixtures of H2S and H2. The constituents of the new compound, (H2S)2H2, interact through weak van der Waals forces in the low-pressure molecular alloy. With increasing pressure, hydrogen-bonding develops and strengthens between neighboring H2S molecules, and at 17 GPa, molecules order themselves into a hydrogen-bonded clathrate structure, similar to those observed for H2O.

For the first time researchers have demonstrated how interactions in molecular compounds may be tuned from the weak hydrogen-bonding limit into the structurally ordered regime. This research may now open the door for an entirely new class of clathrate structures based on hydrogen-bonded H2S frameworks.