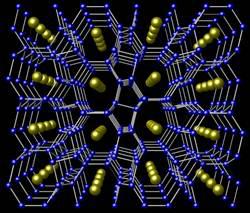 Silicon is the heart of modern electronics, in both pure element and compound forms. It is also one of the few elements capable of forming chemical analogs of gas hydrates, or clathrates—structures that form cages or networks that trap appropriately sized guest atoms.

Tim Strobel, a Geophysical Laboratory staff scientist and the team leader, works on different types of clathrates, both in molecular and covalent systems. Together with Oleksandr Kurakevych, Duck-Young Kim, Takaki Muramatsu, and Viktor Struzhkin, they study synthesis and thermodynamic stability of silicon and carbon analogs of water clathrates.

By continuously increasing the pressure applied to a mixture of elemental Na and Si, the crystallization product changes from elemental Si to NaSi6. At a high enough pressure, the high-symmetry diamond structure loses its stability and passes into low-symmetry tunnel structure, in which the three dimensions of space become non-equivalent. Despite high-pressure, high-temperature formation conditions, the researchers found that this new compound is completely recoverable to ambient conditions.

The team discovered that all sodium-silicon clathrate phases are only stable at high-pressure conditions. This is crucial for obtaining the crystals with exceptional electrical properties, and is unachievable by conventional chemical synthesis routes. "Synthesis under equilibrium conditions is the easiest and most efficient way to achieve the best material's performance," Kurakevych said. "High pressure synthesis remains the method of choice for characteristics improvement of high-pressure phases: previously for mechanical and optical properties of diamond and cubic boron nitride, now for electrical properties of silicon clathrates."

Another fascinating aspect of this work relates to making high-pressure materials that exhibit superlative properties, without using pressure. "Because these materials are only truly thermodynamically stable under high-pressure conditions, all previous synthesis reports of silicon clathrates may be viewed as the metastable synthesis of high-pressure phases at low-pressure conditions via a chemical precursor route. These findings identify silicon clathrates as the first example of this type of synthesis approach, and suggest that the synthesis of other high-pressure structures is possible by starting from the appropriate chemical precursor," said Strobel.