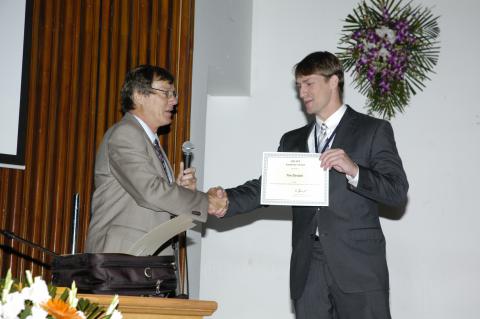 Carnegie's Geophysical Laboratory's newest staff member, Timothy Strobel, will be given the prestigious Jamieson Award on September 26, 2011, from the International Association for the Advancement of High Pressure Science and Technology in Mumbai, India. The Jamieson Award is given to a scientist who has just completed outstanding PhD thesis research or to an exceptional postdoctoral researcher. Strobel's research focuses on developing new hydrogen-based materials to meet our country's energy challenges. "Tim began his work at Carnegie as fellow in 2008," remarked Geophysical Laboratory director Russel Hemley. "His novel approach to exploring and creating new materials exemplifies Andrew Carnegie's vision of supporting exceptional individuals. As a staff scientist, Tim will be expanding his research on materials in new directions." Strobel is being honored for his studies of how hydrogen can be stored in tiny molecular cages called clathrates and in related compounds. His work, which has been published in a number of prestigious journals, has already received over 300 citations. Strobel received his PhD in chemical engineering from the Colorado School of Mines in 2008. Last year he was honored with the 2010 Young Investigator Lecture at the Gordon Conference on High Pressure Research. He became a Carnegie staff scientist at the Geophysical Laboratory on September 1, 2011. "Carnegie is proud to support young investigators with a vision of the future," remarked Carnegie president Richard Meserve. "We look forward to Tim's future successes." The International Association for the Advancement of High Pressure Science and Technology is also known as Association Internationale pour L'Avancement de la Reserche et de la Technologie aux Hautes Pression (AIRAPT). The organization holds international conferences every two years to promote high-pressure science and technology. Strobel will be presented the Jamieson Award and deliver the award lecture at the September meeting in Mumbai.