Diatomic Inmates of a Molecular Prison 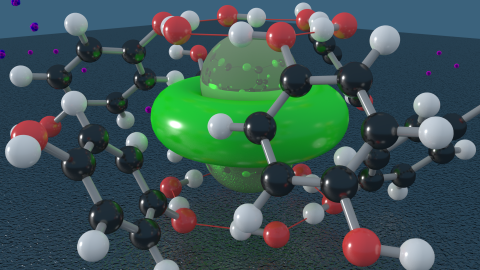 A team of scientists including the Geophysical Laboratory’s Tim Strobel and Venkata Bhadram now report unexpected quantum behavior of hydrogen molecules, H2, trapped within tiny cages made of organic molecules, demonstrating that the structure of the cage influences the behavior of the molecule imprisoned inside it. Their work is published by Physical Review Letters.

A detailed understanding of the physics of individual atoms interacting with each other at the microscopic level can lead to the discovery of novel emergent phenomena, help guide the synthesis of new materials, and even aid future drug development. But at the atomic scale, the classical, so-called Newtonian, rules of physics you learned in school don’t apply. In the arena of the ultra-small, different rules, governed by quantum mechanics, are needed to understand interactions between atoms where energy is discrete, or non-continuous, and where position is inherently uncertain.

The research team—including Anibal Ramirez-Cuesta, Luke Daemen, and Yongqiang Cheng of Oak Ridge National Laboratory, as well as Timothy Jenkins and Craig Brown of the National Institute of Standards and Technology–used spectroscopic tools, including the state-of-the-art inelastic neutron spectrometer called VISION at the Spallation Neutron Source, to examine the atomic-level dynamics of a special kind of molecular structure called a clathrate.

Clathrates consist of a lattice structure that forms cages, trapping other types of molecules inside, like a molecular-scale prison. The clathrate the team studied, called β-hydroquinone, consisted of cages made from organic molecules that trap H2. Only a single H2 molecule is present within each cage, so the quantum behavior of the isolated molecules could be examined in detail.

“Practical examples of isolated quantum-influenced particles that are trapped inside well-defined spaces provide the opportunity to probe dynamics under conditions that are approaching simulation-like perfection,” Strobel explained.

The research team was able to observe how the hydrogen molecule rattled and rotated within the cage. Surprisingly, the observed rotational motion was unlike that of H2 trapped in related systems in which molecules can rotate almost freely in all directions.

“The behavior we observed here is similar to the behavior of H2 molecules that are adhering to a metal surface,” Strobel explained. “It is the first time this behavior, known by physicists as a two-dimensional hindered rotor, has been observed for hydrogen trapped within a molecular clathrate.”

It turns out that the local structure of the clathrate cage greatly influences the dynamics of H2, causing a preference for rotation in two dimensions despite the fact that there are no chemical bonds involved. In addition to the fundamental insights, this discovery could have important implications for the design of hydrogen storage materials that can trap H2 for energy and transportation applications.