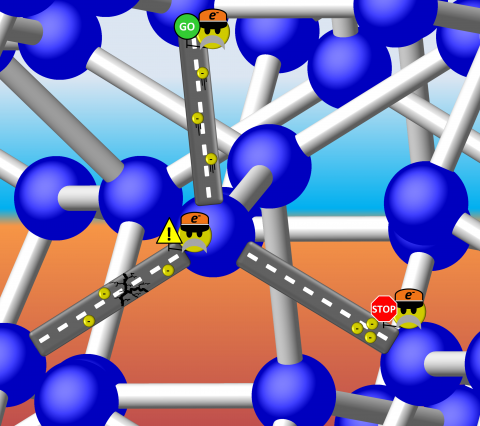 It would be difficult to overestimate the importance of silicon when it comes to computing, solar energy, and other technological applications. (Not to mention the fact that it makes up an awful lot of the Earth's crust.) Yet there is still so much to learn about how to harness the capabilities of element number 14.

The most-common form of silicon crystallizes in the same structure as diamond. But other forms can be created using different processing techniques. New work led by the Geophysical Laboratory's Tim Strobel and published in Physical Review Letters shows that one form of silicon, called Si-III (or sometimes BC8), which is synthesized using a high-pressure process, is what's called a narrow band gap semiconductor.

What does this mean and why does it matter?

Metals are compounds that are capable of conducting the flow of electrons that makes up an electric current, and insulators are compounds that conduct no current at all. Semiconductors, which are used extensively in electronic circuitry, can have their electrical conductivity turned on and off—an obviously useful capability. This ability to switch conductivity is possible because some of their electrons can move from lower-energy insulating states to higher-energy conducting states when subjected to an input of energy. The energy required to initiate this leap is called a band gap.

The diamond-like form of silicon is a semiconductor and other known forms are metals, but the true properties of Si-III remained unknown until now. Previous experimental and theoretical research suggested that Si-III was a poorly conducting metal without a band gap, but no research team had been able to produce a pure and large enough sample to be sure.

By synthesizing pure, bulk samples of Si-III, Strobel and his team were able to determine that Si-III is actually a semiconductor with an extremely narrow band gap, narrower than the band gap of diamond-like silicon crystals, which is the most-commonly utilized kind. This means that Si-III could have uses beyond the already full slate of applications for which silicon is currently used. With the availability of pure samples, the team was able to fully characterize the electronic, optical, and thermal transport properties of Si-III for the first time.

"Historically, the correct recognition of germanium as a semiconductor instead of the metal it was once widely believed to be truly helped to start the modern semiconductor era; similarly, the discovery of semiconducting properties of Si-III might lead to unpredictable technological advancement," remarked lead author, Carnegie's Haidong Zhang. "For example, the optical properties of Si-III in the infrared region are particularly interesting for future plasmonic applications."

Other co-authors on the paper are Hanyu Liu, Zhenxian Liu, and Michael Guerette of Carnegie; Kaya Wei and George Nolas of University of South Florida; Oleksandr Kurakevych and Yann Le Godec of Institut de Minéralogie de Physique des Matériaux et de Cosmochimie; and Joshua Martin of the National Institutes of Standards and Technology.