“Superdiamond” carbon-boron cages can trap and tap into different properties 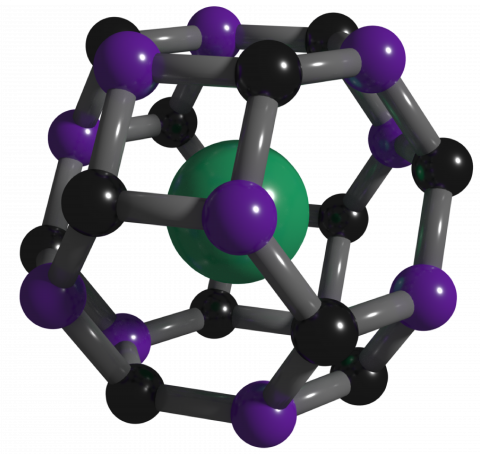 Washington, DC— A long-sought-after class of “superdiamond” carbon-based materials with tunable mechanical and electronic properties was predicted and synthesized by Carnegie’s Li Zhu and Timothy Strobel. Their work is published by Science Advances.

Carbon is the fourth-most-abundant element in the universe and is fundamental to life as we know it. It is unrivaled in its ability to form stable structures, both alone and with other elements.

A material’s properties are determined by how its atoms are bonded and the structural arrangements that these bonds create. For carbon-based materials, the type of bonding makes the difference between the hardness of diamond, which has three-dimensional “sp3” bonds, and the softness of graphite, which has two-dimensional “sp2” bonds, for example.

Despite the enormous diversity of carbon compounds, only a handful of three-dimensionally, sp3-bonded carbon-based materials are known, including diamond. The three-dimensional bonding structure makes these materials very attractive for many practical applications due to a range of properties including strength, hardness, and thermal conductivity.

“Aside from diamond and some of its analogs that incorporate additional elements, almost no other extended sp3 carbon materials have been created, despite numerous predictions of potentially synthesizable structures with this kind of bonding,” Strobel explained. “Following a chemical principle that indicates adding boron into the structure will enhance its stability, we examined another 3D-bonded class of carbon materials called clathrates, which have a lattice structure of cages that trap other types of atoms or molecules.”

Clathrates comprised of other elements and molecules are common and have been synthesized or found in nature. However, carbon-based clathrates have not been synthesized until now, despite long-standing predictions of their existence. Researchers attempted to create them for more than 50 years.

Strobel, Zhu, and their team—Carnegie’s Gustav M. Borstad, Hanyu Liu, Piotr A. Guńka, Michael Guerette, Juli-Anna Dolyniuk, Yue Meng, and Ronald Cohen, as well as Eran Greenberg and Vitali Prakapenka from the University of Chicago and Brian L. Chaloux and Albert Epshteyn from the U.S. Naval Research Laboratory—approached the problem through a combined computational and experimental approach.

“We used advanced structure searching tools to predict the first thermodynamically stable carbon-based clathrate and then synthesized the clathrate structure, which is comprised of carbon-boron cages that trap strontium atoms, under high-pressure and high-temperature conditions,” Zhu said.

The result is a 3D, carbon-based framework with diamond-like bonding that is recoverable to ambient conditions. But unlike diamond, the strontium atoms trapped in the cages make the material metallic—meaning it conducts electricity—with potential for superconductivity at notably high temperature.

What’s more, the properties of the clathrate can change depending on the types of guest atoms within the cages.

“The trapped guest atoms interact strongly with the host cages,” Strobel remarked. “Depending on the specific guest atoms present, the clathrate can be tuned from a semiconductor to a superconductor, all while maintaining robust, diamond-like bonds. Given the large number of possible substitutions, we envision an entirely new class of carbon-based materials with highly tunable properties.”

“For anyone who is into—or whose kids are into—Pokémon, this carbon-based clathrate structure is like the Eevee of materials,” joked Zhu. “Depending which element it captures, it has different abilities.”