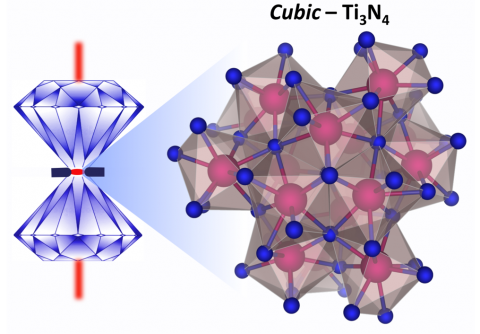 A team of experimental and computational scientists led by the Geophysical Laboratory’s (GL) Tim Strobel and Venkata Bhadram have synthesized a long sought-after form of titanium nitride, Ti3N4, which has promising mechanical and optoelectronic properties.

Standard titanium nitride (TiN), with a one-to-one ratio of titanium and nitrogen, exhibits a crystal structure resembling that of table salt—sodium chloride, or NaCl. It is a metal with abrasive properties and thus used for tool coatings and manufacturing of electrodes. Titanium nitride with a three-to-four ratio of titanium and nitrogen, called titanic nitride, has remained elusive, despite previous theoretical predictions of its existence and the fact that nitrides with this ratio have been identified for the other members of titanium’s group on the period table, including zirconium.

Strobel and Bhadram’s team—GL’s Hanyu Liu, and Rostislav Hrubiak, as well as Vitali B. Prakapenka of the University of Chicago, Enshi Xu and Tianshu Li of George Washington University, and Stephan Lany of the National Renewable Energy Laboratory —undertook the challenge. Their work is published and highlighted as an Editor’s Suggestion in Physical Review Materials.

They created Ti3N4 in a cubic crystalline phase using a laser-heated diamond anvil cell, which was brought to about 740,000 times normal atmospheric pressure (74 gigapascals) and about 2,200 degrees Celsius (2,500 kelvin). Advanced x-ray and spectroscopic tools confirmed the crystalline structure the team had created under these conditions, and theoretical model-based calculations allowed them to predict the thermodynamic nature and physical properties of Ti3N4.

Table-salt-like TiN is metallic, which means it can conduct a flow of electrons that makes up a current. But cubic Ti3N4 is a semiconductor, which means that it can have its electrical conductivity turned on and off. This possibility is tremendously useful in electronic devices. Titanium-based semiconductors are particularly popular as catalysts for solar water-splitting reactions to produce hydrogen, a clean renewable-energy source.

This ability to switch conductivity on and off is possible because some of a semiconductor’s electrons can move from lower-energy insulating states to higher-energy conducting states when subjected to an input of energy. The energy required to initiate this leap is called a band gap. The band gap for cubic Ti3N4 is larger than expected based on previous model predictions. Furthermore, like metallic TiN, Ti3N4 is expected to exhibit excellent mechanical and wear resistance properties.

“To our knowledge this is the first experimental report on semiconducting titanium nitride” said lead author Bhadram. “We believe that this work will stimulate further experimental and theoretical efforts to design new ways to scale up the synthesis of Ti3N4 at ambient pressure.”